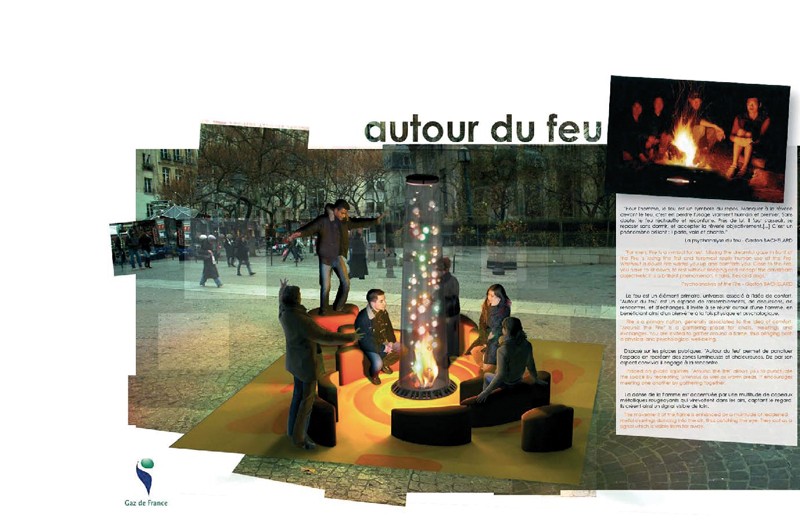 « For men Fire is a symbol for rest. Missing the dreamful gaze in front of the Fire is losing the first and foremost really human use of the fire. Without a doubt Fire warms you up and comforts you. Close to the Fire, you have to site down, to rest without sleeping and accept the daydream objectively : it is a brilliant phenomenon, it talks, flies and sings. »

Psychoanalysis of the Fire – Gaston BACHELARD

Fire is a primary notion, generally associated to the idea of comfort. “Around the Fire” is a gathering place for chats, meetings and exchanges. You are invited to gather around a flame, thus bringing both a physical and psychological well-being.

Placed on public squares, “Around the fire” allow you to punctuate the space by recreating luminous as well as warm areas. It encourages meeting one another by gathering together.

The movement of the flame is enhanced by a multitude of reddened metal shavings dancing into the air, thus catching the eye. They act as a signal which is visible from far away.

You can install one or more and so play with the available space, and possibly use it as well to add on to it an information point for the district.

You meet up there to relax, chat, meet and have fun with the neighbourhood. At night you can join others for warmth and reassurance as around a campfire.

Both in summer and winter, Fire makes you want to come together.

This clean natural gas flame works permanently. The heat which is produced is however limited to 40° Centigrade by a vitroceramic glass plating for safety reasons.

The ground covering made out over recycled rubber, takes up the graphics of the flame. The seatings integrate themselves to enhance the feeling of warmth given by fire : they are heated by a water circuit flow which adapts the temperature on that of the surroundings.

A device which sucks in the air at the base blows out a multitude of shavings. These are made over various metals which redden colour and glow differently. The rise of the shavings with the hot flow of air is reinforced by a discreet turbine device.